Tas’i lun is the traditional Chinese name for the person credited with inventing paper. According to legend, Tas’i lun was an official in the imperial court of the Han Dynasty who lived in the 2nd century CE. He is said to have developed a method for making paper from pulped rags, which was a significant improvement over the writing materials that were in use at the time, such as bamboo slips and silk.

Tas’i lun’s invention of paper is considered one of the most important technological innovations in the history of China, as it greatly increased the efficiency of record-keeping and communication and played a key role in the spread of education and culture in the country.

However, there is no historical evidence to verify the story of Tas’i lun or to confirm the details of his life. 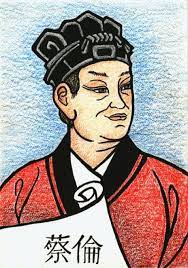 Cai Lun (AD 50-121) Inventor of paper. An invention that truly changed the world.

Cai Lun (Ts’ai Lun) was born in Guiyang during the Eastern Han Dynasty. After serving as a court eunuch from AD 75, he was given several promotions under the rule of Emperor He of Han. In AD 89, he was promoted and given the title of Shang Fang Si, an office in charge of manufacturing instruments and weapons. He also became a Regular Palace Attendant. He was involved in palace intrigue as a supporter of Empress Dou, and in the death of her romantic rival, Consort Song. After the death of Empress Dou in AD 97, he became an associate of Consort Deng Sui.

In A.D. 105, Cai invented the composition for paper along with the papermaking process – though he may have been credited with an invention of someone from a lower class. Tools and machinery of papermaking in modern times may be more complex, but they still employ the ancient technique which involves. Felted sheets of fibre suspended in water, draining of the water, and then drying into a thin matted sheet. For this invention, Cai would be world-renowned posthumously, and even in his own time, he was given recognition for his invention.