Both scrolls and rolls were used as a way of storing and organizing written documents in ancient times, and they were often used for literary works such as plays, poems, and histories, as well as for legal documents and administrative records.

An example of a scroll would be a single sheet of parchment or paper that has been written or printed on and then rolled up for storage. This type of document might be used to store a poem, a play, or other literary work. 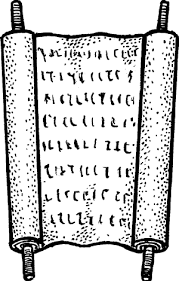 Here are a few more specific examples of scrolls and rolls: